Desktop-Only Content: This information applies only to the Desktop version of Terraria.
Relics

Not to be confused with Trophies, which can be obtained in all world types.

Relics are Master Mode boss drops. They are three tiles wide and four tall, hover above a golden pedestal, and resemble their respective bosses. They have a golden particle effect, can be used as a form of trophy and emit light when placed close to a light source.

Placing a relic can be used to show that you have defeated its respective boss in Master Mode; however, they can also be obtained through Journey Mode when the difficulty is set to the maximum.

There are currently 27 Relics in game in total. 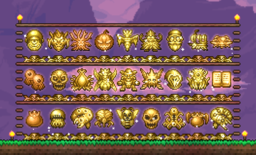 All of the relics placed down.