Desktop/Console/Old-gen console/Mobile-Only Content: This information applies only to the Desktop, Console, Old-gen console, and Mobile versions of Terraria.
Ruler

Attacking with the Ruler on 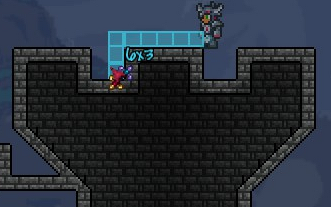 an informational accessory which aids the precise placement of blocks. It is purchased from the Goblin Tinkerer for

Console version, the Ruler displays measurement lines for counting blocks while building. In the

Mobile version, this effect can always be toggled via the "Ruler On"/"Ruler Off" button in the upper left of the inventory. In the

Old-gen console version, the Ruler displays a grid framework similar to that of the Mechanical Ruler

Its best modifier is Legendary.