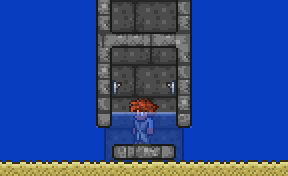 One possible approach to safely hunting sharks while breathing on the ocean floor, with actuators used on the floor and the lowest blocks on the walls for exiting for item collection on either side.

The Shark is an enemy found in Oceans. Sharks are rarer than other Ocean enemies like Crabs or Pink Jellyfish, though they are still relatively common.

3DS version, a variant of Shark known as Orcas can be found in the Ocean. Despite their differences in name, sprite, and stats, the Shark and Orca have the same behavior.