We would love to get your opinion on your experience with our site with a short survey. Take Survey

Due to the many important biomes and structures in the world, exploration is a big part of Terraria. However, since most of them are far from the spawn point, travelling can be very time consuming.

Below are often-used methods that can make exploration far easier and faster.

Because of the fact that the world's surface is not fully flat, it can be quite difficult to travel from one side of the map to another in order to visit points of interest, such as the Jungle or the Dungeon.

Players can flatten the uneven terrain by mining: you can flatten the top of small rises, fill in small dips in the ground, tunnel through larger natural elements like Mountains or Hills, and build bridges with Platforms on chasms and lakes.

Early on, hammering the top of a two-block-tall pillar to the slanted variant allows for very steep climbs. In the case of a taller, steeper mountain, it is easier to place Ropes or Platforms for faster climbing.

One of the simplest yet fastest forms of travel. A Rail track can be easily built above ground or inside an underground tunnel.

There are 3 track components:

Tracks can be laid in the air without support. You can grapple to them, but you will pass through them when walking or flying normally.

Hammering the rails at the end of a track changes its behavior:

Holding down ▲ Up or ▼ Down button will force the Minecart to take the upper or lower path of a switch track regardless of the current state. This allows a branching rail network to be easily navigated.

A Sky Bridge is a long bridge built high up in the sky, usually with only a single layer of blocks or Platforms. Besides the travel advantages, it can also let you intercept Fallen Stars for easier collection as well.

Note that some blocks will also change the biome of the bridge, and this can spawn more dangerous enemies on top of it. If the bridge is too high, Harpies (and in Hardmode, Wyverns) will spawn as well. Even if the bridge is below the Sky Layer, these Sky enemies can spawn above you.

A skybridge can also make an effective boss arena, maximizing mobility in all directions and leaving a clear line of fire to the boss.

A Subway is an underground tunnel that is built by digging a long horizontal shaft. As with the Skybridge, Boots can be used to quickly travel through the subway, and Asphalt can be used as flooring.

For ease of returning to the surface from the subway, Junctions can be built at desired places on the map by mining branched shafts. A vertical exit can be made with a Rope or as a long Platforms stairway.

Subways can double as a barrier to prevent the spread of Evil or Hallowed biomes: in order to work as one, it must be at least 7 blocks tall, and must not contain any Corruptible soil.

Note, that if for some reason you need or want to tunnel through the desert (though this is a good reason why tunnels should be a good distance below any deserts, it's always a good idea to survey the landscape before you embark on any major construction projects), there is a way to tunnel through the desert biome without mining everything above, and it involves bombs. Because there is a delay in ticks between the sand blocks falling and forming, it is possible that with a grappling hook, position yourself at the top of some tunnel, set a bomb to go off near the edge, and quickly place dirt blocks or another solid block as soon as the explosives go off. This will be very slow, but it is possible. However, if you just dig a little deeper, you should hit hardened sand and sandstone blocks, which can be easily tunneled through.

The bridge can also be used to fight the Wall of Flesh more easily without falling in Lava or getting stuck in uneven terrain. It also works as a good farming spot for Underworld enemies, such as Voodoo Demons and Mimics.

A Hellevator is a vertical shaft of mined blocks that generally extends all the way from the surface to the Underworld.

It can be easily built with explosives or with the use of Mining Potions. Gills Potions will greatly help when digging through water, while Obsidian Skin Potions do the same for lava lakes. Avoid building the hellevator near the Jungle; you may reach the Jungle Temple, which is made of Lihzahrd Bricks that cannot be mined until a Picksaw is obtained.

While a simple hellevator only consists of a hollow shaft, it can also be equipped with periodic rows of platforms, a line of Rope, or a hoik, which can facilitate upward travel. Note that platforms often slow down the descent speed and that using a hoik will still require a mean of negating fall damage (see below). Riding the Slime Mount

or holding a Portal Gun

Depending on how the end of the shaft is reached, fall damage may be a problem. However, there are many ways to avert it:

The Cobalt Shield or any of its upgrades will prevent knockback by any enemies who find their way into the shaft through side entrances. Getting hit by an enemy can knock the player out of the shaft, interrupting travel and (if fall damage is not negated) often causing instant death.

Similar to the subway, the hellevator can also be incorporated as part of your defense against the spread of the Evil or Hallow biomes. In this case, the hellevator must be at least 3 blocks wide to prevent the biomes from spreading through it.

A skylift is a tower-like construct, used to get to Space more easily.

There are five types of skylifts: 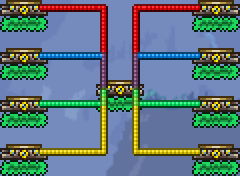 The fastest form of travel, but also the most expensive and time consuming, as it requires a large amount of Wire for greater distances.

is incredibly helpful when wiring teleporters at long distances, as it can instantly place Wire over the world.

Hoiks are exploits in which sloped blocks are used for fast travel. This occurs when a character sprite shares space with a sloped block: The character is immediately displaced a couple of tiles in a predictable direction.

Pylons are a new feature added in Journey's End. They allow the player to teleport around the world via the different pylons in the game. They are purchased from an NPC with at least 85% happiness for a base price of 10 gold, for example putting the merchant in the forest will satisfy the requirements and the merchant will sell the forest pylon.

To use pylons there must be at least 2 NPCs nearby and there must not be an active boss or invasion. Pylons can almost be a replacement standard teleporters in a world but note the there can only be one of each type of pylon in a given world.

Pylons have many advantages as well as disadvantages.