Desktop/Console/Old-gen console/Mobile-Only Content: This information applies only to the Desktop, Console, Old-gen console, and Mobile versions of Terraria.
Slimy Saddle 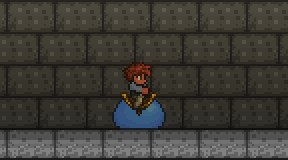 A player riding the Slime Mount

A player bouncing on a dummy

For the minion, see Slime Staff. For the

The Slimy Saddle is a mount-summoning item. When used, it summons a friendly Slime Mount. The Slime offers increased jump height (21 tiles) and movement speed (20 mph), decreases fall damage by half, and enables floating on water surfaces and continuous auto-jump by holding the ↷ Jump key. On the

Mobile version, landing on enemies while riding this mount will deal 40 damage (excluding defense) to them in addition to pushing the player back up again. For this damage, the Slime Mount is considered a minion and benefits from effects that boost the damage of summons.

Comparison between not using the Slime Mount at the end and using it to gain extra altitude.