Spider Caves, also known as Spider Caverns, are mini-biomes located in the Cavern layer. They feature distinct black Background walls and there are numerous Cobwebs filling the area. The Cobwebs rapidly grow back, which is a unique feature of the biome. Spider Caves can rarely contain Web Covered Chests, which they may generate with during world creation. The webbed Stylist NPC can spawn here. 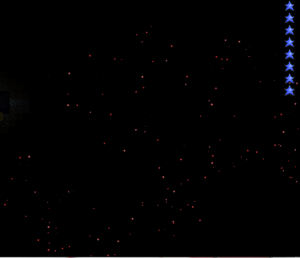 Cobwebs in a Spider Cave as seen while using a Dangersense Potion.

Jeepers Creepers • “Stumble into a spider cavern in the underground.”
Enter your first underground Spider Cave.