Not to be confused with Summoning items.
For a sortable list of all available summon weapons, along with their stats for comparison, see List of summon weapons.

Summon weapons are a type of weapon that spawns secondary characters that will aid the player during battle by automatically attacking enemies within range. They cannot be damaged or killed, and deal summon damage.

Whips are related weapons that deal summon damage without summoning any minions. Hitting an enemy with a whip causes a player's minions to target it immediately. Whips also affect sentries.

There are currently 25 summon weapons on the

Desktop version, 19 on the 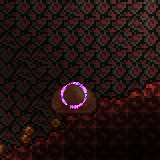 Minions follow players in a manner similar to Pets, flying and passing through blocks as necessary to keep pace with the player's movements, though most cannot move through blocks for the purposes of attacking. Exceptions are the minions summoned by the Tempest Staff, Xeno Staff, Desert Tiger Staff, and Stardust Dragon Staff, which can attack through blocks.

3DS version, the player is limited to only summoning one of each sentry type, with no way to raise the cap.

You and What Army? • "Command nine summoned minions simultaneously."
Have nine minions summoned at the same time.