Are you sure it's a reference to Half Life? I've seen antlions like that way before, at games like Phantasy Star and Final Fantasy IV. --Alenonimo 19:15, 24 June 2011 (UTC)

Take a look at the "In Popular Culture" section of the antlion wiki on Wikipedia. You are correct in that there are antlion bosses in both FFIV and FFIX. However, those antlions walk and use physical attacks. The Antlion Worker in HL2, however, has a ranged attack. It is possible that both the real-life antlion and the Antlion Worker were both reference points when Re-Logic created the Antlion. --Lordhood117 19:27, 24 June 2011 (UTC)

I've revised the entry to say that it is possible that the ranged attack may be a reference to the Antlion Worker instead of the creature in general being the reference. --Lordhood117 19:34, 24 June 2011 (UTC)

Guys... It's not a reference to half life 2. It's not "based off of" or even "inspired from". It's not even "may be" a reference. It's just an antlion. Period. The fact that there are also antlions in HL2 is a coincidence, nothing more, and doesn't deserve a mention in the article. As for the projectile attack, it's just a game mechanic, the same one 2D games have been using for nearly 20 years now... happypal (talk • contribs) 20:30, 24 June 2011 (UTC)

Then that's a spawning bug (I've never seen that), since removing a block of sand beneath him makes him drop and putting sand above it makes it slide/noclip upwards. Can anyone prove that quote? yeh (talk) 15:25, 28 June 2011 (UTC)

Yes,it CAN spawn inside blocks,tough when he spawns he will start going up no-clipping tough the sand.Still it can spawn inside sand.--MadPedro 02:09, 8 July 2011 (UTC)

I agree. First of all they almost never spawn, and second, they almsot never drop those mandible.

The drop rate is completely accurate. Confirmed in the code. Drops are random of course so you could very well kill a hundred of them and never get a mandible. --GauHelldragon 04:13, 7 July 2011 (UTC)

I had the opposite experience, I have 7 manidibles with roughly 30 kills 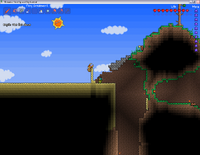 This may be a spawn bug where the Antlion spawned on a 1 wide wall of sand. Is this a bug or just unlikely but possible?

Bro, that Antlion probably climbed there, but i think it is possible for it to spawn on such a wall: i've seen vultures spawn on a lone sandblock 10 blocks away from a desert.Rampardos18 15:29, 11 June 2012

I completely think that antilions have a very low chance of dropping a antilion mandible... But i have 1 and i didnt know what to do with it so i threw it away and just didnt do anything.. but now i know how to get them. go to a directly in the day and if it turns night then go home wait till tommorow and if you've searched the whole desert then make a new world and try again. i had to do this 20 times and delete old worlds till i got 20 antilion mandible then made 2 sandguns.. but then once i didnt need the mandibles Antilions started spawning more and more as i needed them less. Hoped this helps anyone!

I just added a disscussion thread here regarding the surface spawn conditions and if I'm seeing the image correctly then I believe it matches the criteria. (for those checking I think the Antlion in question spawned "on" the tile below to one at the top of that stack of sand) Aidanamite (talk) 00:43, 15 November 2020 (UTC)

Ok, correction, just took a closer look at the image, counting the tiles properly and according to the check there is only 33 sand tiles not the required 40. So unless the spawn conditions are different from when this image was taken I think this was a bug Aidanamite (talk) 00:59, 15 November 2020 (UTC) 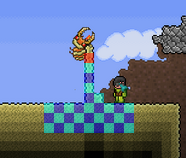 I think I may have discovered the cause of this situation. While playing just now I was using an antlion as a sand generator and while it was placing sand, it began to move upwards whenever sand was placed within a 3 tile wide area at its base. So what I think happened with the antlion in the image is that it spawned on the below sand block but was then shifted upwards due to being partially "buried" from the sand column that was already there Aidanamite (talk) 04:47, 16 November 2020 (UTC)

I've been going on a bit of a quest to find the bare minimum requirements for spawning.

At the point where the game tries to spawn the Antlion it will check an area stretching 4 tiles either side and 8 tiles down (Total: 9x8 tile horizontally centered below the spawn point), if this area contains 40 or more sand tiles then the given point will be able to spawn an Antlion.

To be a little more specific, it checks up to 8 tiles below the spawn point (stopping early if a non-sand tile is found), and for each: counting the number of sand tiles in a row to the left and right (up to 4 tiles to either side). If the number found is greater than or equal to 40 (at least 40) then it is a "valid" point.