All of the armor defense values are listed here, and that's great, but some of the armor set pages don't even list their defense. Defense should probably be included in the armor piece infobox template as well.

Personally, I'm opposed to the merge, mostly b/c I don't think that the table on Defense is really appropriate there. It's collecting too much information that should be elsewhere. --JonTheMon 20:26, 14 June 2011 (UTC)

I oppose the merge, and the nuking of the table. Providing the stats of the armor in this consolidated way provides a good, quick resource for players. As it is, the Defense page is describing a game mechanic while this is providing specific item stats. -- Wynthyst

I think i like the idea of keeping the table on the Defense page but reducing it to 2 fields as proposed by JonTheMon. Then we can add a link to the Armor page, for more detailed information. Also the Defense pages improved a lot since I proposed the merge. I also understand now that Defense is about the concept and Armor is about items, so we should not merge the pages. Yet, this differentiation is only meaningful, if we remove the item details from Defense. --Yoda 11:40, 15 June 2011 (UTC)

I believe that the part on armour effects not being displayed if vanity being worn should be placed in notes, as I would not consider it a bug, I think it is meant to happen. non-registered user : Nikolai5 01/01/2012 (GMT)

Should be listed here. Its even equippable on mannequin dammit.

I made this table[edit source]

Maybe we could work something out of it. Like writing on each of them which one is the best at this or that or which ones are only second. Because I feel a lot of people think the three new hardmode ore armors are better than the three old ones when it's not entirely true. Fegazeus (talk) 13:26, 13 November 2013 (UTC) 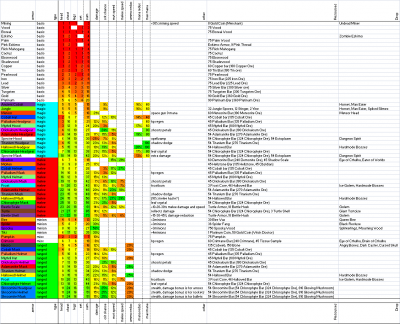 I think would be nice to display "row border lines" between several lines. The reason is that, when multiple lines are present in the same row, it is difficult to understand to which row it belongs.

I've disabled sorting for now. I'll look into actually fixing the table later, but having it sortable doesn't seem like that high a priority, and it's a fairly lengthy and tedious task. For now this should stop the problem from appearing, at least, as the major problem is that you can't resort the table into its original form without reloading the page. Gearzein (talk) 00:11, 14 March 2015 (UTC)

The Turtle Armor is the strongest set of armor, but you can improve it a little bit by swapping the Turtle Helmet with the Chlorophyte Mask which will give you 4 more points of armor. Then if you have a full set of warding accessories, with the Paladin's Shield, Ankh Shield, Celestial Stone and buffs like Well Fed and Ironskin, you can't go further in defense. But remember this : the best defense in Terraria is and always will be mobility (and lifesteal can help a lot but you can't tank very well with lifesteal alone anymore). Red Devil is one of the few enemies that are meant to deal tons of damage even if you wear good armor. Just learn to dodge its projectiles or simply don't go to the Underworld layer (you don't need to go there anymore if you already have the Turtle Armor obviously). ---- Fegazeus (talk) 16:27, 8 January 2014 (UTC)

I added sections for the "Wizard Set" (hats and robes) and the few bits of armor that aren't part of anything. I realize that means further duplication with the Defense page, but I figure this page is called Armor not Armor Sets so there's no reason they shouldn't be listed here. BlueMana (talk) 19:56, 24 April 2015 (UTC)

Fossil armor needs to be added. I dont know how to properly edit to do it myself and im afraid ill mess up.

Same with ninja armor, which is now also a set with throwing bonus.

Gladiator armor needs to be added as well.

I've updated Fegazeus' table to version 1.3. What do you think? Any objection to posting it?

Large, multiple page images generally make wiki pages complicated. I realize it's not exactly an easy task for many users, but I think that if this were to be used, it'd be best as a table on its own page. Then it would have the same ability to be scaled and edited as the rest of the wiki. Gearzein (talk) 23:26, 15 September 2015 (UTC)

OK. Here's the Excel file I used to make the image, in case anyone wants to use it to make an improved version: https://mega.nz/#!qAMGmapb!yiulX9QDQWeRPZw0D5MhddKw6FjkRTeRgK9IfKL0gJg Morenohijazo (talk) 19:43, 17 September 2015 (UTC)

I made an other version, with few changes(the color of the armors->the rarity color of the armor, ninja and fossil armor are now referred as throwing, added the forbidden armor, angler armor and mining armor are now "misc" armors instead of "basic". Everyone can also modify it online, because I put it on Google Sheet : https://docs.google.com/spreadsheets/d/1Wod3Z41j7oDbxQw2BAxy7-DKBAM9tRnpxtd1xcSBpuk --Lightg4 (talk) 20:42, 19 October 2016 (UTC)

The Wiki has that there are 67 armor sets on desktop but if you count them there are only 64. So, before an edit, wanted to check to see if I'm missing something that is being counted or not —Preceding unsigned comment added by Rajwarrior (talk • contribs) at 04:35, 16 August 2018

Values don't seem to add up.

It says that a Hallowed Mask, a Turtle Scale Mail, and Hallowed Greaves is 62 Defense, +18% melee damage, +18% melee critical chance, and +10% melee speed.

Any idea what I'm missing?