I have been attempting for a while now to get some Armor Polish from these skeletons, but so far have only received a few Beam Swords and the skeleton banner. Can anyone else confirm that they actually drop the Armor Polish, or perhaps I am just very unlucky? Ivysaur1996 (talk) 22:45, 14 October 2013 (UTC)

2015, v1.3; i can confirm the drop. killed 400 of them in hardmode in a hallowed cavern and got ONE armor polish, pre-mechanical bosses. mby the droprate is a bit broken or i was just unlucky but except for the armor polish i got every rare thing multiple times. mechanical boss spawners, hallowed keys, beam swords, lots of Lost Girls, Hallowed Mimics and normal Mimics spawns. — Preceding unsigned comment added by 134.3.75.204 (talk) at 23:14, 29 July 2015 (UTC)

27 Feb, 2016, 11:06PMEST: Could it be that the Drop rate is bugged? I have the exact same issue as of the current version, and have not had any past issues with any of the other Ankh Charm pieces. — Preceding unsigned comment added by ScoutytheScout (talk • contribs) at 04:12, 28 February 2016 (UTC)

I believe you about the source code, but there must be a bug then because it's definitely not dropping at a 1% rate. Not just me, but many people have asked about the same thing for this item specifically. Every other rare item, even rarer items, has dropped like 10 times already. Statistics isn't magic, multiple people can't all be that (un)lucky for that long. Can you find the bug in the source code and let them know how to fix it? ^^ — Preceding unsigned comment added by 73.213.2.138 (talk) at 02:57, 7 June 2019 (UTC)

If you would like some insight on how the drop is calculated (in normal mode): Every time an NPC with one if the IDs above is killed, the game generates a natural number between 0 and 99, using elaborate randomizers. If this number happens to be equal to 0, the killed NPC drops an Armor Polish. There is nothing indicating a bug in this procedure, it is the same for all other drops (of course, with other limits and, potentially, additional conditions).
In fact, it is absolutely not guaranteed to receive 1 Armor Polish out of 100 Armored Skeletons. Here's the math:
The process of generating the random number can be described as a composed experiment: Shuffle a deck and check whether the top card is an ace, repeat 100 times. Since this experiment is a random experiment with exactly two possible outcomes, "success" (card is an ace) and "failure" (card is not an ace), in which the probability of success is the same every trial, the experiment is a Bernoulli trial. The probability of success is

. The number of trials is

. The probability of getting exactly

(Binomial distribution).
However, we don't want to exclude getting more than one success, so we use

99.99568% is extremely close to 100%, but just not equal to it. Therefore, it is possible that no Armor Polish drops out of 1000 Armored Skeletons.
What is probably more interesting, though, is the minimum number of Armored Skeletons required to be killed in order to have at least a certain chance of obtaining at least one Armor Polish. You haven't obtained one with a chance of 99.99568%, so let's try it with 99.99999999%: 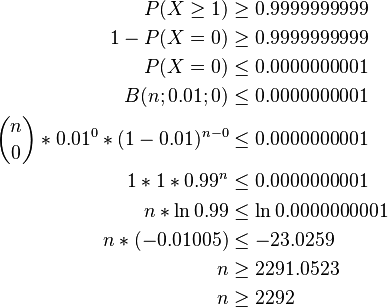 At least 2292 Armored Skeletons have to be defeated to get at least one Armor Polish with a chance of 99.99999999% (not 100% – you might still need to defeat more!).
Usually, though, a chance of 99% should suffice, which requires defeating at least 459 Armored Skeletons (sparing the whole calculation here, you're getting the idea).
It's all stochastics! :p
--Rye Greenwood (talk) 14:56, 7 June 2019 (UTC)
I created a new normal world to test it again. After killed 400 Armored Skeletons (the number is from

), I had 6 Armor Polishes. Can you check your kill count via

Rye, I'm not arguing with the statistical calculations. Bluntly, a bug could easily make the odds irrelevant, and the bug does not need to be in the obvious part of the code. The proper response to results that don't match the supposed odds is to start bringing in significance values -- proper p-values are beyond my remembered math, but I can tell you that I'm up past 400 kills now, which is down below a 2% chance for no drops.
You describe the randomizers as "elaborate", which immediately makes my ears prick up -- pseudo-random number generation should be a well-contained module if not a library call, and it's easy to screw up, e.g. by mismanaging seeds (or by homebrewing your own RNG in general). And how many off-by-one and range errors have already been spotted and fixed in Terraria code?
The apparent condition for the problem is at least pre-Plantera (I've killed all three mechbosses, and at least half my kills are after at least some of them).
--MentalMouse42 (talk) 11:48, 30 July 2020 (UTC)