Do Sonar Potions and Fishing Potions (or boosting fishing power) help find these? I want to know if I should combine all three fishing-related buffs or not. --Macks2008 (talk) 14:29, 29 January 2015‎ (UTC)

I'm not sure how old your I haven't noticed any increased chance to catch crates using any potion besides the Crate Potion. However, when using the Sonar Potion, you can ignore non-crate bites in order to save bait. The Fishing Potion (or increasing fishing power) will also decrease the rate at which your bait is consumed. --ValornTheRed (talk) 19:10, 4 July 2015 (UTC)

The page as quoted, "It's improbable to be a reference, but the crate's sprite resembles Weighted Storage Cubes from Portal franchise." However I feel this is a bit misleading and very unlikely to be reference nor does it assist in the article in any form. They're crates, box shaped by nature, and the sprites do not, to me, resemble anything close to the portal cubes outside of minor details of them being box shaped, with a few styles being similar. Should this information be left in? I have nothing against the trivia bit afterwards indicating it to be used for adventure maps, etc. Kalbintion (talk) 02:20, 21 July 2015 (UTC)

A lot of trivia is added by anonymous users, and is often questionable. You won't get into any trouble for removing nonsensical trivia; go ahead. As for the bit about its application in maps, a lot of things can be used creatively in maps. Unless there were to be a guide page for making maps, that info doesn't really belong on the wiki. –KM100 (talk) 02:27, 21 July 2015 (UTC)

Merging all the crates[edit source]

i feel as if the crates should be merged into 1 page, this one, Crates, the page may have the loading features of the fishing page, but it may fit.

I was looking for source online and found the one by Pryaxis on github. Looking at projectile.fishingcheck() the probability for crates seem to be different there. If this source is accurate the information on this page is wrong, can anyone confirm the accuracy of this source?

I have taken a look, too, and luckily, crates are handled near the top of the function, so it is comparatively easy to determine the chances (assuming a fishing power of 100; in any of the special biomes, taking Corruption as an example here):
Golden Crate:

Corrupt Crate (or any other biome crate):

For Iron and Wooden Crates caught in a biome that does not qualify for a biome crate, the

part is simply dropped from the calculation, because flag5 is never being considered due to the second parts of those conditions (the biome checks) always evaluating to false.
With a Crate Potion, num19 is set to 20 instead of 10, so the initial

, effectively doubling all chances.
Little disclaimer just in case: All of this is taken from the

Desktop 1.3.5.3 source code, Terraria.Projectile.FishingCheck(), as you said. I have absolutely no idea about other versions or platforms. I have tested these chances extensively using an emulator of the fishing algorithm.
--Rye Greenwood (talk) 00:05, 3 December 2019 (UTC)

flag6 is set to true if Main.rand.next(num17) returns 0. The probability of that event is

, with num6 being the fishing power (int num6 = Main.player[owner].FishingLevel(); (yes, it is altered later on, but that does not matter since we assume a lake of ≥300 tiles)), so in our example 100. 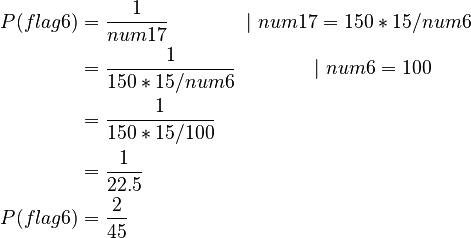 Corrupt Crate (or any other biome crate):

Thank you very much! I will go ahead and update the page.

No problem. In C# int/int is generally integer division. Also if you think it's relevant information for either here or bait (or fishing) master bait sustain with crate potion, tackle box and high test fishing line starts at 76 fishing power, without tackle box it's 87, without high test fishing line it's 98 and without either it's 119. without crate potion isn't that interesting as it's 251 with both.
DJIKhaos (talk) 02:04, 5 December 2019 (UTC)

to clarify that's assuming nothing is being skipped with a sonar potion
DJIKhaos (talk) 02:14, 5 December 2019 (UTC)

Hmm. Am I right in getting the sense that a function of crate probabilities against fishing power would be almost impossible to write out? --MentalMouse42 (talk) 16:05, 5 December 2019 (UTC)

Starting with the chances of the flags; they can be described as follows:

Inserting that into the formulas of the crate chances:

Please excuse the mathematically incorrect notation with these inequations in the middle, but they're there to show that a case differentiation is necessary. Depending on the fishing power, different formulas apply.

For the final functions, it is necessary to assert we are fishing in a lake of ≥300 tiles (it just gets too long if we want to make that variable, too) and have a fishing power >0, of course.

That's it! With these functions, it is possible to calculate the different crate catch chances for any given fishing power. If the Crate Potion buff is active, simply change the

at the beginning of every function to

I really recommend you to take a look at these functions, too; the integer division has an interesting effect. Here are the functions in a form that dynamic geometry applications should accept (well, at least GeoGebra does):

Please let me know if something is unclear or I've made a mistake.

You took "nearly impossible" as a challenge, didn't you? "It just gets a little long", oy gevalt! ;-)
Initial thoughts:
* I might have more thoughts later, right now I'm barely through my morning coffee.
* Thanks for your efforts!
--MentalMouse42 (talk) 12:40, 6 December 2019 (UTC)

ETA: Whoops on the idea of simplifying formulas; looking back, I'm seeing that most of what I thought were brackets are floors, which make things different. Looks more and more like those graphs are the way to go. --MentalMouse42 (talk) 23:35, 6 December 2019 (UTC)
OK, I think I've got a handle on it now. Five regimes, three of which can actually see play, and you're pro-rating between various flags that choose among different curves. I can't see where the biome/no-biome distinction appears in the late equations. And I still think graphs are likely to be more useful. I may need to poke into this graphing site of yours, but I can already get the feeling it doesn't like Firefox very much. --MentalMouse42 (talk) 02:54, 7 December 2019 (UTC)

Well, after reading that last post of yours, I couldn't resist! To be honest, I didn't expect to get a result like this – being able to compute the probability of catching a specific type of crate with any given fishing power –, so I'm quite happy with it.
Thanks for your feedback! Regarding the flags: The item that is caught during the fishing process is determined by a number of booleans, e.g.:
These flags are assigned true with a specific probability, expressed in the code like this (extracting only flag6 and flag7 as an example here):
Generate a random integer between 0 and a variable that depends on the fishing power, and set the flag to true if that integer equals 0. Therefore, the probability of that flag being true is 1/num17 or 1/num18 for flag6 and flag7 in this case, respectively.

I agree the graphs are important for visualization, but I'm not sure in what way they could be integrated best. I was thinking about simply taking a screenshot and uploading that as an image file, but displaying data in images is generally frowned upon (partly because they are so static and hard to update). We could also render the graphs with the Graph MediaWiki extension, but I think that's blocked by Gamepedia.
--Rye Greenwood (talk) 23:39, 8 December 2019 (UTC)

I think image-file graphs would at least be an interim step pending a suitable extension. I just glanced at Minecraft's Experience page, and yep, the graphs there are .PNG.
ETA: Also it looks to me like each flag's probability just progresses to a maximum probability and then pins there. If so, the equations could be greatly simplified by defining variables accordingly.
--MentalMouse42 (talk) 00:06, 9 December 2019 (UTC)

Thoughts? (I chose SVG, not PNG, because that allows zooming in without losing quality.)

(Pearlwood Crate and Mythril Crate) I found both them on caverns layer. There were Mushroom, Dirt, Stone and Ice biomes around. Not sure about biome trigger —Preceding unsigned comment added by Elder Axe (talk • contribs)

I have been opening a pile of Sky Crates in Journey mode 1.4 and have found gold ore, tungsten ore, lead ore, silver ore, iron ore. I think the item has changed if someone can confirm; if so, the text saying ores are only in Wooden and Pearlwood creates needs to be updated. I'm not sure if other biome crates can have ore; the Iron Crate did not.

Can the pre-hardmode Crates still have new items if opened in Hardmode?[edit source]

The respective pages and notes here still say that Crimson/Corrupt crates (and the normally inaccessible Hallowed crate) can have Cursed Flames/Ichor/Crystals in Hardmode. Izzit so? --MentalMouse42 (talk) 22:12, 22 May 2020 (UTC)