It's not very good to mix two pages of different content with each other on wikis. I think we should separate them. — Preceding unsigned comment added by 7 UP (talk • contribs) at 03:49, 25 June 2011 (UTC)

Golden chests can be destroyed with the molten hamaxe. I think when the person that wrote it tried it, his chest wasn't empty. — Preceding unsigned comment added by The Rock2510 (talk • contribs) at 22:01, 1 July 2011 (UTC)

The Gold Chests that require a Gold Key look to be a new type of chest and are not just Gold Chests in certain areas. The sprite looks different. futRtrubL 02:45, 11 August 2011 (UTC)

This is bug encountered directly after the molten hamaxe bug. When playing with a friend they happened to destroy a gold chest with their hamaxe. We were wondering what had happened because the chest disappeared completely. So the chest and it's supposed contents were invisible to both of us, but as I walked around where the chest had been I started picking up all the (invisible on screen) items that were in the chest. I thought this was just due to tons of lag, but then it got worse.

That's where the real bug started. I picked up 5 gold chests So I started placing them down so she could see how many I had picked up. I then began breaking them again (to pick them back up) but I couldn't break one of the chests. For some reason, I was still able to pick up a chest, but it didn't get removed from where I had placed it. I then realized I could get infinite chests from this bug.

I also got this glitch just today, the picture shows a semi glitched chest and I my inventory almost filled with chests. I don't know how this happened but it is pretty cool. 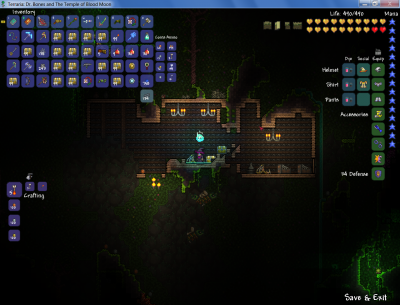 I found a gold chest from a fresh world that almost imeadiatly was put to hardmode. This chest contained silver bullts which is abnormal from a gold chest to contain. — Preceding unsigned comment added by MeeTonToE (talk • contribs) at 00:04, 1 November 2013 (UTC)

As of 1.3, Rich Mahogany Chests, Granite Chests, and Marble Chests can all be found underground with the same loot as Gold Chests. However, all three of these pages simply redirect to the central page chest, with no indication of the possible loot they can contain. It would be tedious to list the same loot table four times on all of these pages, so perhaps the Gold Chests loot page could be moved to the normal Chest page's loot tables, as it's done with the surface loot. –KM100 (talk) 21:18, 16 July 2015 (UTC)

I was about to propose converting the loot tables into templates for easy transclusion and correction. This is all the more reason to consider my proposition.--Macks2008 (talk) 19:00, 28 July 2015 (UTC)

I agree that the way that chest loot is handled needs to be reworked, but I wouldn't put them on the main Chest page (not that I have a suitable alternative). I think that having surface chest loot on that page has always been kind of awkward, and that more of a distinction needs to be made between chests as player-crafted storage items and chests as generated loot containers.
It is at times like this that I look to the Minecraft wiki to steal ideas. Perhaps something similar to their Chest Loot page could be used for this purpose? Gearzein (talk) 19:34, 28 July 2015 (UTC)

Shouldn't it show in the history that the Dragon Armor used to be found in Gold Chests in the XBOX version? (Pretty pointless question...). TerrariaInspectre (talk) 21:31, 5 March 2019 (UTC)

is it just my imagination, or does this specific type of chest (but not others?) invalidate housing? I was trying to figure out why a house was invalid when I Nick has had a valid frame, walls, etc., and when I removed the gold chest from the house, it became valid. Weird thing is, it only seems to be gold chests; I have a glass chest in my Nurse's house and haven't had any problems with that. Does it behave differently because it can be found in generated structures, perhaps? Or am I just misunderstanding what's going on completely? — Preceding unsigned comment added by Macks2008 (talk • contribs) at 02:42, 18 August 2019 (UTC)

To me, that sounds like a bug (also, I cannot reproduce this behavior whatsoever on

The forums are a good place to ask (post a screenshot for people to analyze). Assuming you're on PC, [this section] is a good place to start (there are multiple threads on the topic, but you can post another. But my first thought here is: Does the chest in the problem house leave the NPC a place to stand (not on platforms)? That requirement is consistently my biggest problem with small houses (especially when open doors take another block off the edge of the floor). --MentalMouse42 (talk) 13:23, 19 August 2019 (UTC)

Does anyone know if certain items in the Dungeon chest are rarer than others? In my personal experience I got multiple Blue Moons, Valors, and Magic Missiles before I really saw the other items. After several (a little under ten maybe) chests I found the welder, handgun, and shadow key, but the Muramasa, Cobalt Shield, and Aqua Sceptre still evade me and I wonder if these are rarer than the others. Thanks in advance. Techhead7890 (talk) 17:48, 2 April 2020 (UTC)

While the original topic of drop rates stands, from preliminary reading it seems like they are uniform 1/N (in this case 1/9) each, presumably like other rares.
If so, this convention for rare drops might need to be made more obvious -- compared to the "Items" table that does list drop rates. Maybe it would be better to rename the "items" table to "common items" or similar? I'll put that edit through right now. Techhead7890 (talk) 18:09, 2 April 2020 (UTC) (done: 18:42, 2 April 2020 (UTC))

So I've taken a look at the

Desktop 1.3.5.3 source code for the world generation part of the Dungeon's Locked Gold Chests and it does indeed seem like there is a surprisingly fair distribution of items (as opposed to the usually consistently high amount of RNG). The entire thing is based on the concept of "Dungeon rooms"; unfortunately, I'm not very familiar with the more complex world gen code, so I don't know the details about that and have to rely on the assumption that a Dungeon room is what it sounds like.
The world gen takes a num with an initial value of 1 into memory, cycles through all Dungeon rooms it has decided to spawn (in a prior step), and does the following:
First, it determines a location for the chest to spawn. This involves some randomization based on the size and location of the Dungeon room.
Second, it looks up the primary item that it will put in the chest, based on the num value and this table:

Now what might happen is that the location the chest is to be placed in is above the surface. In that case, the item determined before will be overwritten and will always be a Golden Key. The chest will furthermore be a regular, wooden Chest upon spawn, no longer a Locked Gold Chest.
Third, it will attempt to place the chest. This means it will check if the location is even suitable for placing a chest, e.g. whether there are two solid blocks beneath the chest, whether there's enough space above it, whether it's completely inside blocks, etc. If this fails, and the chest cannot be placed for whatever reason, the process starts anew with determining a random location.
It will repeat this for up to 1000 times; if it didn't succeed after 1000 times, it will simply move on to the next Dungeon room (with the same num in memory). If it did succeed at one point, it will increment num by 1 and continue with the next Dungeon room. Again, it rolls a location, checks it, and repeats for 1000 times at max. If it reaches nine successful placements of chests (i.e. num is 9), num will be reset to 1 for the next Dungeon room. So, in theory, it should give the first and tenth Dungeon room chest a Shadow Key, the second and eleventh a Muramasa, and so on. To me, this pretty much ensures that there are as many different items as possible in the chests.
Three side notes:
This is what I could get from the source code. It's very possible that I have missed something, because, again, I haven't dived into the underlying Dungeon room concept, but hopefully this is enough to clear some things up for you.
--Rye Greenwood (talk) 21:37, 2 April 2020 (UTC)

P.S.: I did some in-game tests with freshly generated worlds and TEdit chest inspection – and I'm absolutely fascinated by how well the theory works in practice. I made six worlds, two for each map size, and these are the numbers of each primary chest item in the Dungeon:

It was also really interesting how consistently the first chest, still in the first tunnel of the Dungeon where there is no divergence, contained the Shadow Key. In world D, that first passageway was quite long and had several chests, and they obediently followed the order of the table above: First chest Shadow Key, second chest Muramasa, third chest Cobalt Shield, etc. – so apparently those Dungeon rooms are internally counted from the entrance along the passage.
The one anomaly in world F is explainable by the fact that the first chest, which was supposed to contain a Shadow Key, was above the surface line, so it got converted to a regular chest with a Golden Key.
Success! --Rye Greenwood (talk) 21:57, 2 April 2020 (UTC)

Wow, great read! Thanks for diving into that and explaining it all!
That does anecdotally clear up some things for me. I went back to finish off the dungeon recently, in order to hit some chests I missed near the start and check the ending areas. I immediately ended up with the Muramasa and two Cobalt Shields. Again anecdotally this does seem to point to the fact that I skipped a few chests as I did some digging into the side of the area midway through, and likely bypassed those chests earmarked to spawn the Cobalt Shield early on in sequence (as you mentioned)... until I got all the way to the end and the cycle repeated the list. But I don't know if it would be the same for anyone else.

Anyway, thanks very much for taking the time to explain the mechanics! I never realised it worked like that in the Dungeon and it was really interesting. Techhead7890 (talk) 13:39, 17 April 2020 (UTC)