no altar to summon Golem[edit source]

I have just confirmed in my world there is no altar to try to summon the Golem. I have also managed to glitch past the door somehow by using my Pwnhammer to rearrange the bricks, then dashing at the door. I have not defeated Plantera, and have only defeated the Destroyer in Hardmode. This was not something I was attempting to do and was not something I tested so I don't know much. (The angle made it impossible to try getting out backwards and I didn't feel like going all the way down again from the surface.) It may have to do with my Frostspark Boots, which I was running with at full speed. Here's a screenshot if anyone is interested: http://cloud-2.steampowered.com/ugc/3281175165272517966/2C9E9FCFFEAF2269386FA9C9D6AA75CB52B91671/ --108.28.74.181 04:38, 4 March 2014 (UTC)

i have found a new way to get in the lizhard in version 1.2.3, i was making a really horrible attempt of making a gap to enter it through with my pwnhammer ( by making half blocks, but sadly enough that would only work if there was already a gap of 1 block high, i knew that but i was hoping that maybe, just maybe i was able to sqeeuze myself through by a bug ), and suddenly i was pushed right through the closed door ( and killed very quickly because, of course i was totally unprepared for the event that i actually managed to get in there ), later that day i encounterd another lizhard while on my way to the underworld ( in case you didnt know it, caving your way down in a jungle is by far the fastest way to reach the underworld on a new map, its also the least time consuming if you dont have some kind of hellevator ), and after a while of experimenting i perfectioned my glitch to a technique reusable every time i died to.

before reading the instructions below, check if floor in front of the door is the same height on at least 4 blocks, if not it might be troublesome moing into the right spot later on

1: hammer the 4 blocks of ground level in front of the door to half blocks whit an hammer

3: walk into said space by hammering the blocks above into half blocks or slopes into a shape you fit in

4: encase yourself whit blocks by filling up as much space on the outer side of the door as you can reach, taking away all free space around you on the side you came from prevents you from beign squeezed in the wrong direction

5: while still in the cramped space you moved into during step 3, hammer the block your standing on, and the block above you farrest away from the temple, this shoud push you away through the door to the interior of the temple

6: do whatever you want to do in the lizhard temple, though your not able to mine the lizhard bricks whitout a picksaw, and the golem can ony be summoned after killing plantera you can still loot all the furniture, wire, pots and traps and chests inside.
—Preceding unsigned comment added by 94.212.139.48 (talk) at 14:24, 24 April 2014 (UTC)

Using the Rod of Discord to enter the temple Pre-Plantera (1.2.4)[edit source]

The Rod of Discord was changed to not allow teleporting into the temple on patch 1.2.1.2. Curious as to why this was I went to the jungle, used my Pwnhammer to remove the mud wall leading towards the temple. I was then able to remove the lihzard temple wall and teleport in just as before. —Preceding unsigned comment added by 24.12.70.177 (talk) at 10:15, 25 May 2014 (UTC)

I have no idea if it is actually in-game bug, or just my-game bug, because I played around a bit with TEdit, although I haven't touched the temple - I'm sure... Basically, I have firstly tried to use the Rod of Discord to enter the temple - hasn't worked, but after defeating Plantera (first time), it did, even though I still have the key hidden in a chest. —Preceding unsigned comment added by 176.248.96.108 (talk) at 21:27, 5 July 2014 (UTC)

it should probably be noted that the Temple can spawn in such a way that the "boss chamber" is unreachable without cheating/teleporting. teleporting in may not even be an option if walls generate too thick. most likely a bug, but it did happen to me. —Preceding unsigned comment added by 76.98.19.167 (talk) at 11:45, 18 July 2015 (UTC)

It might be possible to hammer the lihzard bricks into hoiks and get in that way. As of yet I have not tested the idea, but if it works then the lihzard items could be obtained just after the pre-hardmode dungeon, allowing you be very overpowered for quite a while. EdgedPixel (talk) 10:52, 27 July 2015 (UTC)

I have experienced the spawning of lihzahrds before pre-hardmode when standing in front of the jungle door, and i have used my vilethorn to try and kill the lihzahrd(A very feeble attempt), when it got to around half health, it got down on all fours. But the surprising thing is that it went through the door and attacked me, i almost died, but killed it in time. it is a real hazard for mid pre-hardmode players like me, and i must warn other players of the same. I expect it to happen because it was standing extremely close to the door and its hitbox(or size, or shape) when it changed was partly inside the door. —Preceding unsigned comment added by 202.166.134.47 (talk) at 07:58, 10 June 2016 (UTC)

I found a big gaping hole in the lihzard temple, If it helps I play

Question about wording in the page[edit source]

Third Paragraph of the intro part, before table of contents:

This makes it sound in a way that you need to kill Plantera in a world to get in the temple. Meaning that from Mechanical Bosses (Notes):

However, if you kill Plantera more than once in a world, you end up with a spare Temple Key (and since you no longer need them with Biome Key Molds, the second Temple key has no use in the same world).
So as an experiment, I made a fresh small world, found the Temple and the result was that a Temple Key unlocks the Temple Door without killing any boss.
Maybe word it something more like this?

Or maybe somehow differently, any thoughts?

Are there any known strategies for finding Jungle Temples? I've been exploring my Jungle excessively and have not been able to find one so far, so this would be appreciated. If there are any, this could also be added to the wiki page for newer players. Diamondcat6746 (talk) 21:37, 13 January 2019 (UTC)

Chest and Super dart trap outside the temple[edit source]

The page clearly says that Lihzahrd chests can spawn outside the temple but says nothing about traps spawning outside the temple (and i found one outside)
is this a common occurrence or a bug Cr4zyw4rrior (talk) 11:23, 23 September 2019 (UTC) 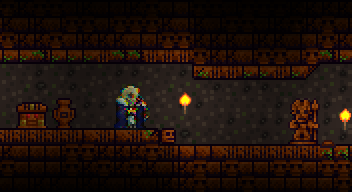