reclarify the maximum number column please because i have VERY frequently gotten roughly 12 meteor heads at a given time in a hallow biome created by adding meteor biome added in. 96.15.233.3 18:49, 10 December 2011 (UTC)

Did you have battle potion and/or water candle active at the time? The time of day also has an effect, unless you are underground. Did you make the meteor underground? I didn't bother including a column for underground meteor, since this typically won't happen naturally. It would have a significantly higher spawnrate/limit. --GauHelldragon 18:57, 10 December 2011 (UTC)

i placed 50 (and any extra meteor pieces the meteor foes dropped) in an open completely hallow area underground at about depth 400 in a small world. it is third layer underground (mostly stone but not yet lava). i would like to point out that spawn rate, if i constantly killed and not let numbers add up, was roughly 7 heads per 3 seconds. further, i couldn't completely clean out neighboring hollow spots and i almost constantly had water based mobs appear below me but out of view range, about 3 min and max not counting dead goldfish. my screen is 1440x900, i think spawn area is equal to half the radius further than view range. i did not use battle or water candle. 96.15.251.38 19:12, 10 December 2011 (UTC)

If you built it in the cavern layer, that explains why the spawn rate/max is different from the one listed. --GauHelldragon 20:29, 12 December 2011 (UTC)

i think i discovered something about spawn radius, or at least the width but height is found similar way. using a 1920x1080 screen resolution and maximized windowed mode (or full screen for similar width measuring purpose), i calculated every block is 32 pixels wide (not amazing yet but whatever) and there are 60 blocks in the screen in one direction. i verified using a ruler accessory (much to my eyes pain). default window size is 50 tiles in diameter.

next i used the gps/compass to measure npc spawn protection size and spawn range, remember that 2 ft = 1 block. the width of the anti-mob bubble is 125 tiles wide give or take 5 tiles for npcs not lining up vertically during my night time test. additionally that spawn protection is depends on the player's location, meaning a monster can spawn inside it if the player itself is outside of it. this is because of the player's own anti spawn bubble (ok square, whatever), which is EXACTLY this equation: window_size*120%. i say window size because i specifically remember an update that linked spawn "rate" and location to the game window's size. i highly doubt what i just said about rate is wrong but i proved the spawn location right. a monster didn't spawn at block 72, it spawned the block right after, thus a monster can spawn at (window_size*1.2)+1 or block 73 as written on the page. given that the article written that this is the maximum, i suspect a player with a screen resolution larger than 2304 wide (or 2560 as idk what screen would be close to and over 2300), the developers expected that players wouldn't use a monitor above 1900 wide. using default window size, a monster didn't spawn till i was around 110 tiles away from an npc, giving enough space for a monster to spawn between the npc's 72 tile wide and player's 30 tile wide.

Some slightly more precise numbers based on experiments in-game and poking around in source: 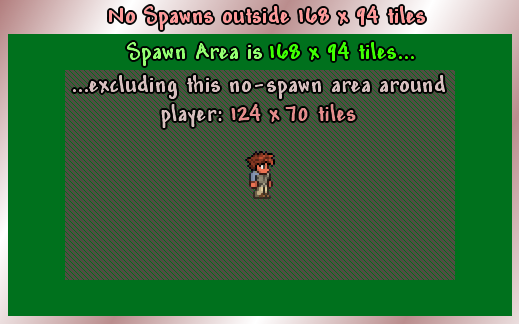 << On the topic of spawn radius and 'spawning basics'. I keep coming back to this page, when I feel like playing again, and still don't get it.

Player is 3x2 (6 tiles), from top left the max distance is 84 west, 83 east, 46 up, 45 down. Chooses tiles until finds empty, check for ground below empty, check for fit hostile at ground arrived at. Checks if in safe area (from top left of player, 62 tiles east or west, 34 tiles up or down). Also, it must be outside a SECOND safe zone of 2088x1172 pixels around player's CENTER of hit box (sprite?). (Also, if the player is not riding a mount then the 'tile' is 3/16 above the top left corner of the player's head. Not sure why. If standing on a half block then the safe zone is only 34 above the tile, but if on full then it is 35. As interpreted from the information provided.)

The graphic helps... by making it easy to ignore the 'basics' and just follow the graphic. But then, I'm left with a question... does this mean that if I build a 124 tile wide platform and stand on the dead middle two tiles, nothing can spawn on that platform to get me? (Ignore fliers going around.) So, in game... I would use the ruler and stand on two tiles... then measure 61 tiles on either side and build to that distance? (Total tiles is 124.)

Taking the ruler back to the 'basics'. The safe area is 62 tiles east or west (so far lines up) of the top left tile of the player. So, I should measure with the ruler to 61 west and 60 east since the right side of the player sprite is the 61th tile. But, that means my safe platform must only be 123 tiles wide (61 + 60 + 2). Now, above my sprite the safe area is 34 tiles... if I am standing on a half block. It is actually 35 if I am standing on a full block. So, as I normally build with full blocks, I can place my roof 35 tiles above my sprite head... or by ruler that would be 38 up... and nothing can be spawned standing on it. That raises another question... for the safe zone, does it look at the space the hostile will be placed in or does it look at the block it will be placed on top of? Because if it looks at the space it will be spawned into then I want my roof at 34... actually, putting it a little lower, like 30, would ensure that I don't have to worry about it. Same goes for below, as long as the open space below where I stand it less than 35 and then it is solid block to 50 tiles below (for example, 30 tiles open space and 20 tiles solid beyond that) then it will be fine.

Biome where player is standing?[edit source]

I confirm that. I also noticed a strange phenomenon: When the player is just outside of the Temple or the Dungeon (when the wall tiles are not resembling that biome behind the player/music changes) the NPCs spawning inside the structure will mostly be Goldfish or bunny, occasionally the mobs of either the structure, or the biome the player is in. 157.181.101.156 16:54, 10 January 2014 (UTC)

This has been a common complaint since the mobile 1.2 update. If you want to add your voice or check for the latest info from the developer, it's best to use the forum. Equazcion (talk) 03:00, 17 Dec 2014 (UTC)

47tiles above and below me is safety-zone...but where am I?[edit source]

Imagine if I wnat to build a thin frame around me that marks exactly the safety zone with me standing on a platform in its center, what height exactly would I have to stand on then? The safetyzone is 94tiles high, but I am three tiles high...soo... huh? —Preceding unsigned comment added by 178.200.21.8 (talk) at 14:15, 14 January 2015 (UTC)

It's actually relative to the tile containing the top left corner of your sprite. However, the tile the game checks for background walls is your centre point. - Andrio Celos (talk) 12:13, 8 July 2018 (UTC)

If the chosen tile is, say, directly above the player, and there are no blocks between the player and the tile, is it cancelled (due to monster cant spawn on-screen)?

At the end of the Spawning Basics section, there's a claim that goblin invasions aren't blocked by player-placed walls. I know this isn't true, because I've built spawn-blocked structures in the surface layer that do not allow goblins to spawn. When I leave and there's an area in spawning range that doesn't have my walls behind it, then the goblins start spawning. I think the person who wrote that blurb was confused about the sorcerer's teleporting ability, because they can teleport into areas with player-placed walls after spawning. Any objections to me updating it?

I think we should have a table outlining the effects of items on spawn rates. I created the following table, but it looks out of place and doesn't use the style templates. (Mostly because I don't know what to do to use them).

Looked at the code, seems like some of the values are wrong/out of date

Calming potion seems to have gotten buffed sometime between 1.2.4.1 and 1.3.4.3, don't know exact version it changed.
In the same version span water candles got an additional +100% spawn rate in space, but only when placed, when held in hand they don't have this additional effect.
Could someone verify(mainly don't trust my math when converting multiplier to %), and update related pages? 86.115.19.146 11:06, 27 October 2017 (UTC)