Just a question about a possible edit, just so people dont get confused, maybe "mined with" could be replaced with somthing like "minimum pickaxe/drill required" or somthing similar? Just a thought. WelchDrew (talk) 20:32, 12 September 2014 (UTC)

Just a question, is tin, lead, tungsten ... ores rarer than copper, iron, silver... ores? Because I played mobile version before and I find it very hard to find ores in the pc version. — Preceding unsigned comment added by 203.104.11.21 (talk)

Tin and its ilk are alternate ores that the world may spawn with instead of their default counterparts. Individually, they spawn under the same circumstances and in the same quantities, but in a world with iron ores, there won't be any lead ore, nor will lead bars appear in chests. It's basically the same as the Hardmode ores, but with even less difference between the two options. While there are a few minor statistical differences between the two, the ore selection is largely only an aesthetic change. Gearzein (talk) 02:47, 4 November 2014 (UTC)

They why do tin, lead tungsten ores worth more than copper, iron, silver ores? And can you get both demonise and climtane ores in one world by killing bosses? — Preceding unsigned comment added by 203.104.11.28 (talk)

There are minor statistical differences between the two ore sets. For example, a Platinum Broadsword deals two more points of damage than a Gold Broadsword, so platinum is marginally more valuable than gold. The differences aren't as vast as the hardmode set bonuses but they're there, so the sell values compensate, I suppose.
As for Demonite and Crimtane, I can't entirely say for sure. The world will only generate the ore that comes with the biome it starts with, so a Crimson world will only have Crimtane Ore veins underground. I know the Eye of Cthulhu will only drop the ore the world is flagged to allow, so even if you erase all the Corruption in the world and replace it with Crimson, you'll only ever get Demonite Ore. I've yet to try importing a biome and fighting its boss for drops to see if, for example, the Brain of Cthulhu drops Demonite in a Corrupt-flagged world.
Gearzein (talk) 03:27, 4 November 2014 (UTC)

Looking at the table, the meteorite ore is a higher rank than the crimtane and demonite ores, yet can be minned by the tungsten pickaxe. should it be placed above those ores or be in the same place as before?

The trivia states that you cannot infinitely generate hellstone or chlorophyte ore within a single world. Chlorophyte grows though. Is it because it isn't truly infinite because you eventually run out of mud? Chewbacca4213 (talk) 15:47, 31 January 2017 (UTC)

One thing that I am looking for a lot is sell value of ore vs. sell value of equivalent bar. Would it be okay to add a column with said information to the charts? I'm thinking something like "Cost efficient to convert to bar" with a yes or a no in the column. It might be a table to put into trivia though, or at least a bullet saying "X, Y, and Z net you more per bar when sold, but A, B, and C net more as ores." Chewbacca4213 (talk) 15:53, 31 January 2017 (UTC)

When me and my friend started a new world, we immediately went to go and mine for materials. We went down into this cave and found cobalt, even though we haven't ever even been to the underworld. Is this a bug or a glitch, or just plain luck? Here is a picture showing the cobalt and me while we were still in easymode, and the weird part is, we found both lead and iron, as well as orichalcum farther down. Diamondnife (talk) 18:32, 16 March 2017 (UTC) 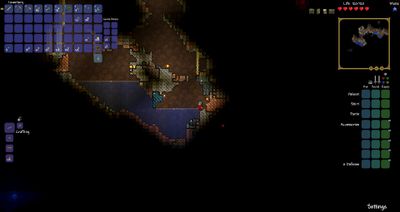 It's likely that you (or your friend) used a custom world generator, which caused extra ores to appear. I'm also noticing the version being played in the screenshot is 1.2, which suggests that there could be modifications at work. There's no code anywhere in the game's files to generate both lead and iron in a world, or to generate cobalt during world generation, so this is not something that can happen in unmodified Terraria. –KM100 (talk) 18:53, 16 March 2017 (UTC)

Not sure if the edit summary gave the reason well enough, but the old table didn't give much useful information, and just didn't fit in the corner. The details were moved down to the body of the article in 2014 and it doesn't really fit the top of the page as a summary any more.

Plus, it wreaked havoc with the layout. I felt that a more succinct and less intrusive infobox, like with most item pages on the wiki and even the refined counterpart, bars was more appropriate. Techhead7890 (talk) 17:50, 5 April 2018 (UTC)

Silver is missing from the "List of ores" section[edit source]

Hardmode ore generation from breaking altars seems to have been fixed in 1.4
(float num3 = (float) (Main.maxTilesX / 4200); in function SmashAltar in Terraria.WorldGen.cs)

In 1.4, enormous 'veins' of ore (primarily copper/tin and lead/iron, but I am certain I have also located silver/tungsten) can be found at the surface. I'm not certain if these deserve their own section, or just a brief mention, but it feels as if they should be brought up in the article somewhere. I was able to get 100 lead ore out of a single vein, and it spawned in the jungle, so they are no longer dirt-exclusive (though I have yet to see any in sand, so I suspect it is dirt and mud surface). (EDIT: Added signature) 72.39.111.222

I'm not sure if I'm reading this right, but it seems to me like the page makes contradictory statements concerning harmode ore generation. In the header section, it says:

>Hardmode ore types are chosen at random as soon as the player destroys an Altar, and unlike Pre-Hardmode Ores, their pairings are consistent; Cobalt Ore will always be generated with Mythril and Adamantite Ores, and vice-versa.

Suggesting that all three ores are determined as soon as the first altar is smashed.

However, further down in the "Hardmode" section it says

Claiming that each ore tier is determined individually when each altar is smashed.

The Terraria Wiki is not a place to collect world generation seeds; I have moved the section to Talk:Ores/Seeds and will mark it for deletion in 24 hours. -- Breathlessblizzard (talk) 23:29, 16 June 2020 (UTC)