Have tried it over 5 times so far. The best i do is to kill retinizer, deal 12000 of damage to spazmatizm and then bravely die because of cursed flamethrower as i cant overrun it. Ideas for soloing it? Also, the Nurse is great help mid-battle. --Dart193 22:49, 5 December 2011 (UTC)

I recommend building a wall in your arena, and using a reflective attack (Thorn Chakram, Meteor Shot, Crystal Storm) to bounce your attacks around the wall while Spazmatism uses Cursed Inferno. He will always attempt to float horizontally level with you while using this, and will not move much if you don't. You'll probably take a couple hits before and after his charge attacks, but it helps a lot, both with damage output and with HP stability. 64.135.215.107 14:14, 2 June 2012 (UTC)

Not quite sure if there was a reply button so I clicked edit BUT ANYWAYS, you could use the statues like 'Heart statues' and such to help refill on hp, what you could do even better is have a 'Grinder' made up of like three heart statues that are continuously activated by a 1 second switch thingy, that way you could have a continuous amount of healing. I'm trying to solo it myself, so good luck to you sir. --Leenock 23:49, 5 December 2011 (UTC) 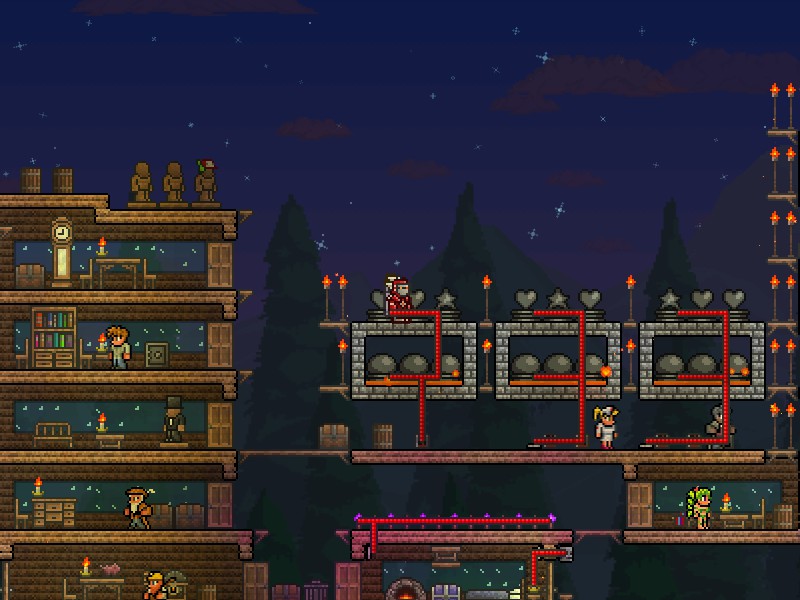 About once out of every three times, when I'm fighting the twins, one of them will sudenly disappear, despite being nowhere near dead (0/24000 HP). While this makes the fight that much easier (and conserves ammo), I was wondering if anyone else has run into this before.

Is it possibly related to the bug where "The twins will disappear if the player(s) are too far away", except only one vanishes and the other one remains, allowing you to finish him off and get his drops (souls/coins/potions)? I have been using Gravitation potions during the fights, so it's possible. — Preceding unsigned comment added by 68.127.28.221 (talk) at 16:22, 10 December 2011 (UTC)

Didn't know if there is a reply button so I clicked edit ANYWAYS I play on the mobile version of terraria and I spawned the twins on ground and all of a sudden when I doing soooo good they disappeared into nowhere I checked the map NOT THERE! Can the makers tell me if its a bug or a rule of some sort because I don't understand and I wasted a lot of precious time so plz help me out — Preceding unsigned comment added by 49.248.187.107 (talk) at 11:02, 29 December 2014 (UTC)

The Twins will despawn if they are far away enough from the player. On the

Mobile version this distance is very low, and they will often despawn midmatch. It's a known bug, and I'm fairly sure it has already been reported multiple times on the forums. KM100 (talk) 22:08, 26 May 2015 (UTC)

1.1 never stopped you from using a hard mode boss summon outside of hard mode. The thing is that the only normal way to have one of those in a pre-hard mode world is to bring it over from a hard mode world. Otherwise you'd have to exploits a glitch of some kind or hack it in. As far as I can tell there's never been a check that prevents you from using one outside of hard mode. Although unless you're prepared then I will agree that you'd need to be careful when you have it in your inventory. --72.83.33.87 00:30, 8 November 2013 (UTC)

I'm starting to think that all projectiles deal x2 damage against players (just like melee weapons in PvP), so if you ask me that is possible. (And we have to change all damage values sometime when we are sure of this.) --Icke 14:52, 11 January 2012 (UTC)

Sorry for the Necrobump, but I had 69 defense and Spazmatism's Cursed Flamethrower was dealing 20 damage per hit. Note that the only version of Terraria I have is

Mobile Edition. I think they deal x2 damage to players in their second form. I increased my defense to 76 with modifiers, but it was still dealing about the same amount of damage. Bramblewhisker (talk) 19:27, 9 October 2014 (UTC)

Not sure if this is confirmed on PC, but on console at least this happens: for both The Twins and The Destroyer, creating a small house away from the rest of your npc village and creating a spawn point in it can result in easily killing both bosses without requiring decent gear. Simply stay in the house or near it and as soon as you die, immediately respawn. As The Twins and The Destroyer are attempting to escape/despawn, you will still be in their vicinity which will force them to reengage you, and this can be done infinitely (at least until daylight). Because of this, you may not have to worry about dodging/blocking damage from these bosses. A bit of a boring, but effective method for beginners to hardmode. Works with the pre-hardmode counterparts, but does not work with Skeletron Prime (despawns regardless). OF course though, this would only effectively work on the lowest difficulty level, as losing your items repeatedly every 10-30 seconds is not advisable. — Preceding unsigned comment added by 67.162.148.107 (talk) at 19:05, 12 August 2014 (UTC)

Interesting little experience So I was playing Terraria, as one does, and I saw these two messages at the same time: This is going to be a terrible night... The Blood Moon is rising... Now me, having had this happen before, thought "Oh great. The Twins AND Werewolves everywhere." Strangely, they never appeared! I thought this was very curious, but I didn't really question because I was having enough problems with the damn werewolves Was wondering about this — Preceding unsigned comment added by ExplorerOfTime (talk • contribs) at 07:26, 30 January 2015 (UTC)

Hi i am struggling on the twins as i have good defense but no good ranged weapons to hit the boss with i've seen the star cannon which i might get but i don't know if it uses mana as i don't want to buy bullets for my guns ! need a gun or ranged weapon that does a good amount of damage to wyverns and the twins.any suggestions to which i should get ? — Preceding unsigned comment added by Blackhammer2105 (talk • contribs) at 19:16, 27 April 2017 (UTC)

Most curious. You should report this in the forums, so the devs are made aware of it. PC bug reports / Console bug reports / Mobile bug reports – Ferretwings (talk) 13:41, 24 March 2019 (UTC)
Before reporting, search the forum for "twins" to see if it has already been reported. When I searched, I saw that it has. Hopefully it will be fixed in the next update. – Ferretwings (talk) 13:47, 24 March 2019 (UTC)

apparently if the twins spawn automatically and you use a mechanical eye on the same night, both pairs will spawn all connected. im calling this the quadruplets glitch. sadly, all of my progress is on my pc, so...….. petition to make the quadruplets glitch work on desktp in jouneys end: milkshaker_PL

In it's second form it can't go and ram you and won't even try and go near you That's why going inside a safety box helps so much Ps:spazmatism is the 2nd objective if you cheesed retinazer Player2170 (talk) 08:05, 4 April 2020 (UTC)