A Teleporter in action

. When two Teleporters are wired together with a triggering mechanism, they can instantaneously exchange players, NPCs, or enemies between them. Teleporting is always instantaneous, has no load time or cooldown, and has no Mana or coin cost.

Unlike most furniture, Teleporters are foreground objects. They actually consist of three inseparable blocks which like all block types can be shaped with a hammer or actuated.

The two Teleporters must be placed on a surface of solid blocks or platforms and connected by Wire, along with a trigger mechanism, such as a Switch or Pressure Plate. When the trigger is activated, all players, NPCs, or enemies (but not Critters, dropped items, or other entities) touching the 3x3 tile area above it are instantly transported to the other Teleporter. A character standing a maximum of three tile heights above the Teleporter can still be transported, and burying a Teleporter two tiles deep can still transport players walking on the surface. Entities retain their location relative to the Teleporter within the 3x3 grid when teleporting, i.e. players using a Teleporter two tiles above its surface will arrive two tiles above the surface of the destination Teleporter.

Teleporting is always two-way: when a connection is activated, both ends will exchange all players, NPCs, and enemies, that are at least partially occupying any square of 3x3 space above Teleporter pads. Players should keep this in mind when constructing Teleporter paths, as enemies could unintentionally be brought into a base, for example. 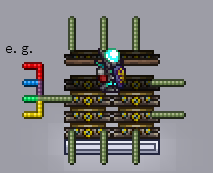 Transfer to 36 different locations via 10 Teleporters.There are four transmitters that are inactive, and two of them are half-height (in order for the character to be in their transmission area)

When a wire network (single color) with more than two Teleporters is activated, the following algorithms determine which pair will activate: