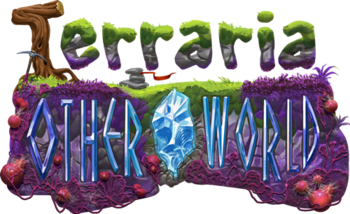 Terraria: Otherworld was intended to be a new spinoff game of the Terraria franchise. It was originally announced by Re-Logic and Engine Software. It was described as an open-world sandbox RPG/strategy game that would take a novel approach to the Terraria experience to explore "what might have been".

Set in an alternate dimension within the Terraria universe, Terraria: Otherworld places the player (and a "rag-tag band of survivors") in a struggle to restore a corrupted world.

In April of 2017, Re-Logic announced that development of the game would no longer continue with the help of Engine Software. Instead, Pipework Studios had taken over in place and Re-Logic announced that "[w]e will be working with Pipeworks to examine the entire game, from top to bottom, to see how it fits with our high expectations and core vision for this project".

In April of 2018, Re-Logic announced that development of the game has been terminated, stating "[o]ur team has a clear vision for this game - one that we shared with all of you with much shared excitement - and, in spite of all of our efforts, the current state of the game remains equal parts far from that vision and beyond behind schedule from our initial planning when we shared Otherworld with all of you three years ago".[1]

With the release of version 1.4.0.1 for Terraria, the previously unreleased soundtrack for Terraria: Otherworld was implemented into the game as an alternate soundtrack accessible through the Party Girl.