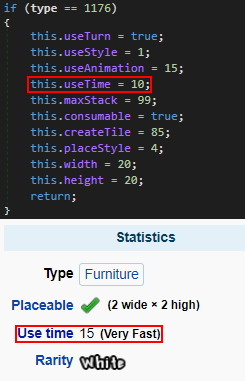 Separating information from different versions of the game[edit source]

The Terraria Wiki is an extremely useful tool for gaining access to accurate information across all versions of Terraria. However, it can be difficult to interpret at times as a result of the version differences, and there are some redundancies. To give a few examples:

As you can see, they use tabs to separate the versions, along with different sections in the article. I believe something similar could be implemented in the Terraria Wiki to make information easier to understand. The majority of Terraria Wiki's users likely play on the latest version of the game (Desktop / Mobile / Console), but for those who play on Old-gen Console / 3DS, there information would still be there.

I created a sample here: https://imgur.com/a/JQipguu It could likely be optimized to remove some duplicate information, but hopefully the main idea is clear.

So im just sitting here, messing around and getting farther than i ever have before (steam user name Venompool25) and suddenly, as im messing around at the homescreen, having just switched worlds, i click by accident and the screen turns dark, i panic for a second thinking i just did something, then realize the screen isnt moving, i let go it starts moving again, and i quickly click again and it stops, i look where im clicked and its the sun, turns out you can move the sun on the homescreen (I'm excited bc i cant find any information online and it seems to me no one has found this yet) Daddipool69 (talk) 08:05, 6 February 2020 (UTC)

This is actually a known feature. It is documented here: Day and night cycle#Trivia (comes up when searching for "sun" on the wiki). --Rye Greenwood (talk) 21:05, 6 February 2020 (UTC)

You will have to purchase it again, as Terraria console and desktop versions have some differences, the most notable being the ability to download mods. Phenomalix008 (talk) 01:42, 11 March 2020 (UTC)

I just added the Guide:Crafting Frostpark Boots to template:Guide/Content. It needs to be added to the other guide links on their respective pages.Pispacedolphinmachinegun (talk) 20:01, 20 March 2020 (UTC)

So I know your going to judge me for having a ps3. I really want to play 1.3 because I’m stuck with the game being technically beaten once you defeat golem. It doesn’t even feel that good. The golem doesn’t end the game in some cool way which makes we want to get 1.3 more. I try to get a ps4 but I can’t. Can anyone help somehow?

Know more about this community[edit source]

I want to know more about this community page. What all topics can I post here? Please help me out with this.