The Underworld (also known as Hell) is the deepest layer of the world, marked by dark rock with orange lines through it near the top followed by a spacious cavern. It is a large, open cavity that stretches across the world's bottom, with a ceiling of Ash Blocks and a lower terrain of large Lava pools, Ash Blocks, and Hellstone. It also contains numerous Ruined Houses, which are natural structures containing unique furniture and other loot. The Wall of Flesh boss needs to be summoned in the Underworld; defeating it will cause the world to convert to Hardmode.

The Underworld contains many hazards, most prominently its broad expanses of Lava and several unique and difficult enemies. Touching Hellstone, the valuable crafting material only obtainable there, without proper equipment inflicts the Burning debuff and mining it releases Lava. Furthermore, because the Wall of Flesh is summoned by dropping a Guide Voodoo Doll into Lava, killing a Voodoo Demon positioned over Lava can inadvertently summon it.

, or dropped from Arch Wyverns

Characters
During Hardmode:
After defeating any mechanical boss:
Critters:
Unique Treasures
From Shadow Chests and Pots:
From Shadow Chests:
Unique Drops
From Fire Imps:
From Demons and Voodoo Demons:
From Voodoo Demons:
From Lava Bats and Hellbats:
From Red Devils in Hardmode:
From Bone Serpents:
From Bone Serpents and Red Devils:

It's Getting Hot in Here • “Spelunk deep enough to reach the molten underworld.”
Reach The Underworld for the first time.

Rock Bottom • “The only way is up!”
Reach the very bottom of The Underworld.

Rock Bottom • “Reach the bottom of the World”
Reach the very bottom of The Underworld. 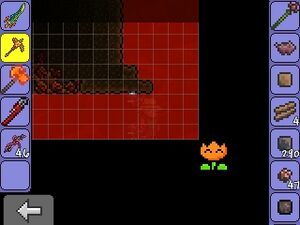 Fire flower icon in the corner of the Underworld on

This content is transcluded from Biome backgrounds § Underworld backgrounds.

Unlike the underground backgrounds, these have multiple layers like surface backgrounds do.