From Terraria Wiki
(Redirected from Time)
Jump to: navigation, search 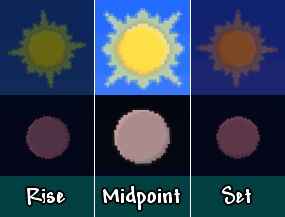 Picture showing: Moonrise, Midnight, Moonset and Sunrise, Midday, Sunset. This image was taken from an old version of Terraria, and therefore uses the previous sun and moon sprites.

“
You should stay indoors at night. It is very dangerous to be wandering around in the dark.

"Sun" redirects here. For the vanity mask, see Sun Mask.
For the cycle of the moon, see Moon phase.

The day and night cycle of the Terraria world refers to the rising and setting of the Sun and Moon, and the ways this can affect the world.

Note that the sun in Terraria rises at the left of the map, even though the left is referred to in-game as "West" (the same for right/East), e.g. when a Goblin Army, Frost Legion, or Pirate Invasion begins approaching.

At the surface layer, unique enemies spawn at night. Nocturnal enemies will run or fly away when the day starts.

Additionally, Eye of Cthulhu, Skeletron, The Twins, The Destroyer, Skeletron Prime and Ocram

can only be summoned at night, and will flee or become nigh-unkillable at dawn. In contrast, King Slime can only spawn randomly during the day, though it can be summoned with the Slime Crown at any time.

The following enemies only spawn during the night:

Naturally, all enemies exclusive to a Blood Moon also only spawn at night.

Survivor • "You have survived the first night!"
Survive your first full night.