Desktop/Mobile-Only Content: This information applies only to the Desktop and Mobile versions of Terraria.
Town Bunny

The Bunny is a town pet. It arrives at dawn (4:30 AM) the day after the player uses the Bunny License, which is purchased from the Zoologist for 5. The Bunny does not count towards the NPCs' "crowded" limit and hence will not affect NPC happiness, although it does count as a regular town NPC for the purpose of the Pylon network. There are six breeds of Bunny, with one randomly being chosen when it arrives. 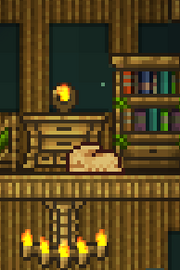 The only requirements for the Bunny to appear is the use of a Bunny License and the presence of a valid house. The Bunny's house can be changed, as with any other NPC, however the Bunny can share the same house as another NPC. The Bunny needs a 2-tile floor space to sleep on occasionally; it may not move into a house if that space is not available.

The Bunny can be talked to with the ⚷ Open / Activate button, like any other town NPC. It will offer a "Pet" option, which places the player directly in front of the Bunny when selected, and displays an animation of them petting the Bunny, an effect that is a purely visual. It only works if there are at least two flat tiles on the same level as the Bunny in front of it. Using any item, taking damage, or closing the dialogue window terminates the animation.

Like the Angler, the status message displayed when the Bunny is killed is "<name of Bunny> has left!". It will respawn within the next days, and may respawn as a different breed.

The Town Bunny may have any of the following names:

Many names are references: