Trees are the largest plants in Terraria, appearing mostly at the surface and often in clusters with similar height. Trees can be chopped down with an axe or chainsaw, destroyed with the use of explosives, or by pouring lava on their bases. Destroying or chopping down a tree will yield many units of its respective wood, an essential crafting material, and has a chance of dropping one or more Acorns that can be planted to grow more trees. Larger trees will yield more of these two items when removed; one unit of wood will drop for each block of tree (including branches), and one Acorn may drop for each leaf patch.

Tree saplings can be painted, although this won't affect the tree at all. However, painting the blocks underneath the sapling will result in the tree being painted when it "grows up".

Forest trees are the most common type of tree, and can be found growing on regular grass. They can be planted on regular grass in any biome. They yield Acorns and regular Wood when harvested. Many Forest trees eventually turn into Corrupted, Crimson or Hallowed ones if the area they grow on is overtaken by these biomes. The growth time of this same, is 2 to 4 days.

Two additional tree variants were introduced in Journey's End: Yellow Willow trees and Pink Sakura trees, which serve mainly as decoration. Their respective saplings can be bought from the Zoologist and can be planted on any type of grass. For instance, their drops depend of the grass that they are planted on, which affects tree loot as well. If a vanity tree is planted on corrupt or crimson grass, one of the following things can occur:

Both types of vanity trees have a 5*1/20 (5%) chance to replace a forest tree during world generation, but not jungle trees or evil biome trees.

Surface jungle trees grow on Jungle grass, in two ways: Acorns can be planted as with most other trees, but jungle trees can also "self-spawn", like Cacti and Giant Glowing Mushrooms. Either way, the prospective tree needs the usual horizontal space, and a 24 blocks headroom to grow. This makes self-spawning fairly rare, because the larger jungle plants tend to appear first and block tree growth. Prior to 1.4, worldgen and self-spawning could create jungle trees under water, but acorns can't be planted under water. However, Underground jungle trees can only grow during the world generation.

Bamboo trees are found in the Jungle. They only drop bamboos. Grow naturally when submerged in water. Requires a pickaxe to be harvested, unlike other tree-like plants.

Trees found in the Hallow have a taller and triangle-shaped foliage, and exist in many different colors: They may randomly be blue, red, light green, cyan, pink, magenta, yellow and purple. They can be planted on Hallow grass in any biome. Like with Corruption and Crimson, normal trees turn into Hallow trees when the Hallow reaches them, and can likewise be changed back by reverting the ground under them. Hallow trees drop acorns and Pearlwood.

Gem trees naturally generate in the Cavern layer, and can also be grown by planting a Gemcorn on stone blocks in the Underground, Cavern, or Underworld layers. Despite being visually made of stone, they still require an axe to be harvested. There are seven types corresponding to the seven types of gems.

Gem trees can be used effectively for farming gems in the early game, allowing earlier, albeit slow, acquisition of a gem staff, robe, and/or hook, making them especially useful for early game magic players.

Gem Trees can be planted on converted stone blocks like Ebonstone Block and Crimstone Block, but they will grow into normal gem trees which drop normal Stone Block regardless of their basis.

Trees are background objects that do not affect player or enemy movement. Therefore, they cannot be climbed or scaled with items such as a grappling hook (except for the Squirrel Hook

), or have blocks of dirt or other walk-on surfaces be placed to overlap their limbs. However, blocks and platforms can be placed in front of the leaves at the top of the tree (or the caps of Giant Glowing Mushrooms) and furniture can be placed there, although it will be obscured by the leaves. Objects that give off light (e.g. campfires, torches, etc.) will also be obscured by the leaves, but will still emit light as normal. It can sometimes be necessary to chop down a tree that is next to a cavern entrance or cliff in the early game in order to replace it with a ladder of blocks that will allow scaling of the steep surface; this becomes unnecessary when the player obtains a grappling hook, Climbing Claws or other items that allow improved jumping or flying. In some versions, it is possible to attach platforms to the trunk of a tree, except palm trees.

Trees must be removed when building houses, as they may obstruct building it. 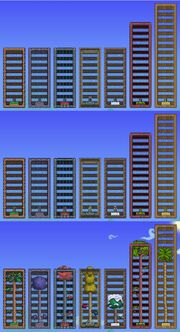 Planting an Acorn on certain blocks will create a Sapling that can eventually grow into a tree. An Acorn can only be planted on pure, Corrupt, Crimson, Hallowed, or Jungle grass, Snow, or Sand. (Not Mushroom grass, but see below). The tree will be of a type according to the block it was planted on, with random size and shape appropriate to its type. Saplings can be destroyed with a pickaxe or drill, but will not drop the Acorn item they were planted from. Saplings can only grow under the following conditions:

Note that world generation can place trees in places where these conditions are not met, e.g. atop a single block of soil.

Giant Glowing Mushrooms have similar space requirements to trees, but they cannot be planted; instead, they will "self-spawn", randomly appearing full-grown on Mushroom grass. Cacti need much less space, but can likewise self-spawn on any sand variant. "Infected" sand will spawn cacti which appear different according to sand type, but are otherwise identical. Jungle trees can also similarly self-spawn on Jungle grass (if there is space), but can also be planted with Acorns.

Shaking occurs when a player hits the trunk or branches of a tree with an axe or chainsaw, but does not fully cut it down. In order for a tree to be shaken, it must both have a "leafy" top as well as not have any blocks in a two block radius from the top. In addition to this, players can shake a maximum of

200 trees a day. Once this limit is exceeded, shaking will not occur until the following dawn.

Shaking a tree has a chance to drop an item or object, or spawn an enemy or critter. The rates may differ per tree type and under certain circumstances, which is visualized in the table below. The icons in front of some of the chances denote the following conditions:

Chances without an icon apply if none of the respective conditions are met, where applicable.

Timber!! • “Chop down your first tree.”
Chop down a tree.