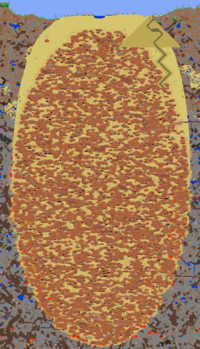 A world view of an underground desert from 1.4 with a Pyramid and an Oasis.

The Underground Desert is a biome located directly underneath a Desert biome. On the

Desktop version the Desert above may generate different features which informs that the Underground Desert is underneath, whereas on the

The structure of the Underground Desert resembles that of a real-world ant hive, featuring numerous small caves mainly composed of Sandstone Blocks and Hardened Sand Blocks, which are connected in varying degree. It is very large when fully explored, rivaling even the Dungeon in size, and is always either circular or oval in shape. The Underground Desert is inhabited by many types of Antlion enemies and is also riddled with traps, making it a challenge to navigate.

Removing the background walls will remove the biome in similar fashion to Spider Caves. 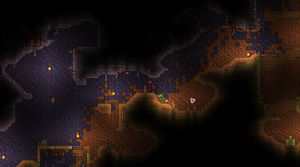 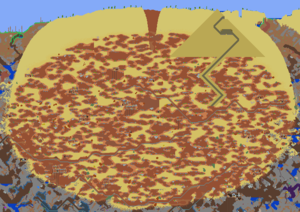 A world view of an underground desert from 1.3

with a Pyramid. Note the large Pit-type entrance.

On all versions, it is possible for one or more Pyramids to generate in the main Desert. When this happens, the Pyramid will often extend somewhat into the Underground Desert, and thus its tunnel can provide another easy means of entry. As with the Oasis

See Desert for more information about the surface entrances to the Underground Desert.