From Terraria Wiki
Jump to: navigation, search
Wall of Flesh 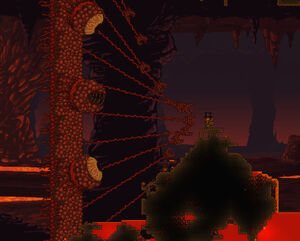 To defeat the Wall of Flesh, the player must attack either its eyes or its mouth. They all share the same life counter, so attacking any of the three will deplete the total health of the boss. However, the eyes have less defense (thus taking more damage) than the mouth. Its other parts don't take damage.

While the Wall of Flesh is alive, the music Boss 2 will play. When Otherworldly music

is enabled, the track Wall of Flesh (Otherworldly) will play instead.

Mobile version, the Wall of Flesh can also be summoned by letting the Guide be killed in the Underworld while the Guide is in contact with lava. Using this method, the Guide can die by any means, either from a player, an enemy or the environment, as long as he is touching lava when he dies.[1]If a Mediumcore player dies in lava (in the Underworld, and Guide is alive) with a Guide Voodoo Doll in their inventory, then the Wall of Flesh will be summoned.

The Wall of Flesh is very large, occupying the entire screen vertically. Once spawned, it slowly sweeps across the map in a single direction, forcing the player to constantly move away for the duration of the fight, while also contending with the Underworld's usual hazards, if possible. It must be killed before it reaches the other end of the map, otherwise, it will despawn and all players in The Underworld will die (with the unique death message "<Player name> was licked.").

Once the Wall of Flesh has spawned, all players within 1800 feet will be inflicted with the Horrified debuff. The debuff lasts until either the player or the Wall of Flesh dies. If a player dies and then returns to the battle, they will again be inflicted with the debuff. While this debuff is active, players cannot flee the battle, i.e. attempting to escape the Underworld via a Magic/Ice Mirror, Recall Potion, Teleporter, or running far ahead of the Wall and leaving, will cause the player to die instantly with the unique death message "<Player name> tried to escape." Exiting the game and re-entering the world allows for escape, but causes the Wall of Flesh to despawn.

for Crimson worlds. It will always drop the Pwnhammer, which is required to generate Hardmode ores in the world. (Generated by destroying altars)

After defeating the Wall of Flesh for the first time, the status message "The ancient spirits of light and dark have been released." displays and the world permanently converts to Hardmode. Hardmode brings new biomes, new and tougher enemies, and a vast array of new equipment.

It's Hard! • “Unleash the ancient spirits of light and darkness across your world, enabling much stronger foes and showering the world with dazzling treasures (and rainbows!).”
Enter Hardmode.