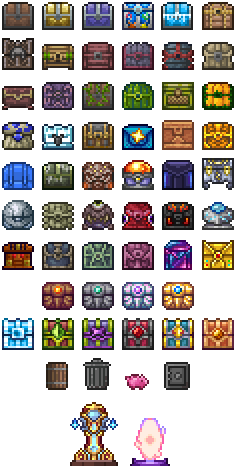 This content is transcluded from Gold Chest § Loot.The loot for any given chest is determined by the location in which it is found. Each chest contains a single "rare item" and an assortment of randomly chosen common items. The rare item is first placed in the chest, then each "set" of common items is checked to see whether or not it will be added. If a set is chosen to be added, a single item from the list is added to the chest.