Desktop/Console/Old-gen console/Mobile-Only Content: This information applies only to the Desktop, Console, Old-gen console, and Mobile versions of Terraria.
Optic Staff

The Optic Staff in use. 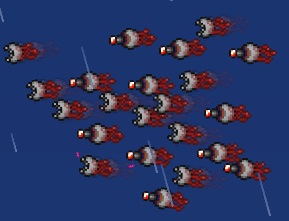 The Optic Staff is an aerial ranged and melee Hardmode summon weapon that summons a miniature version of The Twins in their second form, which follow the player and attack enemies. The summoned pair of characters, named Spazmamini and Retinamini, attack via a melee and ranged laser attack, respectively; similar to the behavior of The Twins boss. Like other minions, the summoned Twins are invincible and follow the player for an unlimited amount of time, unless the player dies, exits the world, summons a replacement minion, or cancels the buff.

Its best modifier is Ruthless. The Mythical modifier provides the widest array of stat bonuses, but these primarily affect the initial summon rather than the resulting minion. Additionally, minions cannot deal critical hits. The only lasting advantage a Mythical Optic Staff has over a Ruthless one is knockback.